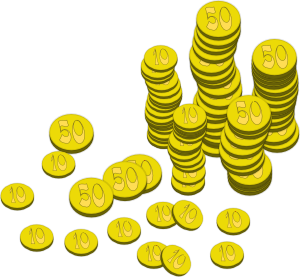 Previous
Next
There are 10 stacks of coins. Each stack contains 10 coins of the same value. However, one of the stacks is made entirely of counterfeit coins. You know that one counterfeit coin weighs one gram more than a genuine coin, and you know how much a genuine coin should weigh. You can weigh the coins on a pointer scale. What is the smallest number of weighings needed to identify the counterfeit stack? Explain.
ShowHide Hint   ShowHide Answer

You only need 1 weighing.

Take one coin from Stack 1, two coins from Stack 2, 3 coins from Stack 3, and so on. Weigh the whole lot on the pointer scale. The excess weight in grams will tell you which stack is counterfeit. For instance, if the coins you gathered weighed five grams more than it should, then the counterfeit stack is the Stack 5, from which 5 sample coins were taken.